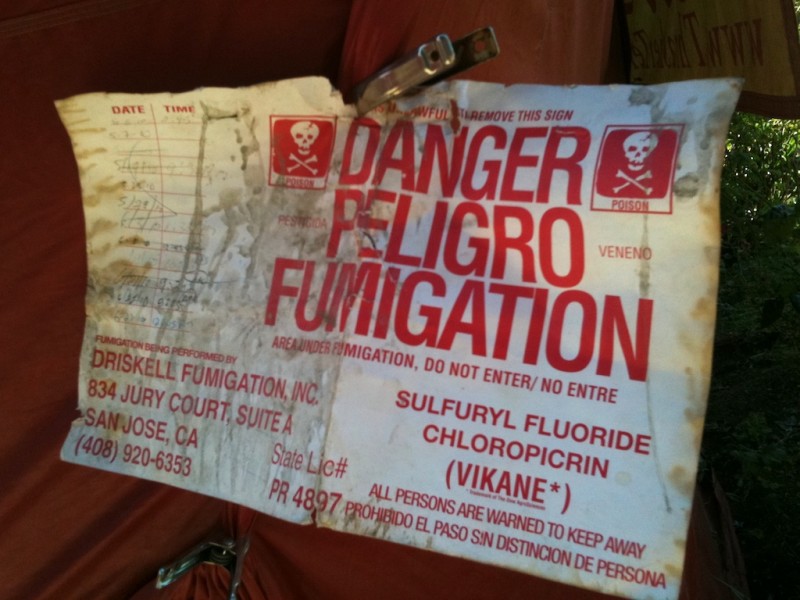 I am writing this post because I’m the next door neighbor of someone who apparently has (or in our case, had) termites. We have a new neighbor. He hasn’t moved in yet and we only met him for 5 minutes the other day. I only wish that in those 5 minutes of talking to him (while he told us how much he loved the house and neighborhood), he would have mentioned that the next day we’d walk outside to see his house tented with warning signs informing us that a poisonous gas was in use.

For those that know me well, they know that I have been posting like crazy everywhere to obtain as much information as I can regarding the chemicals used in fumigating for termites. I decided I’d post what I discovered regarding termite extermination in CA.

In researching eradicating termites, I had to learn more than I ever wanted to know about them first. I had no idea there were multiple types of termites and that some are more prevalent in areas of the country than others. The University of Kentucky: College of Agriculture’s Termite Control report has an easy to read FAQs on termites. For information more specific to CA, check out University of California Statewide IPM Program’s Termite report. However, I learned that the biggest culprit are drywood termites. These are the little suckers that cause us so much grief. Again, the University of California Statewide IPM Program’s Drywood Termites report is awesome. It not only spells out who/what they are (with pictures), but it also gives you facts on how to even prevent them, let along how to get rid of them.

Apparently, in CA, you can spot treat and/or you can whole house eradicate termites. Check out the CA Consumers Affairs Termite Fact Sheet. This will explain the different types of extermination. If you are doing a whole house eradication, there are only 2 types – heat and using sulfuryl flouride. Regardless of what you do, I highly suggest using a licensed exterminator for this. Termites are evasive and they can keep coming back, if not taken care of properly.

There are many people who will say that sulfuryl flouride is the best alternative (or at least a good one). But for me, the “Warning – Poisonous Gas” signs caused concern and I wanted to see what it was and how it would effect my family.

From my search online, I found the National Pesticide Information Center’s (NPIC) fact sheet on sulfuryl flouride. Since sulfuryl flouride is a toxic gas, the home must be evacuated and you may not eat any foods that were left in the home during fumigation. I wanted to know – what about those that live nearby? Our home is extremely close to our neighbors. I can easily see inside their kitchen window from ours and we could easily communicate from window to window. So what happens if the tent leaks? Or when they open up the tent to release the gases? How does this effect those that weren’t even informed or evacuated? Will the gas effect my organic garden?

I called the NPIC to ask these questions. What I learned is that sulfuryl fluoride is a true gas, which means its odorless, tasteless, and clear. They mix it with Chloropicrin (tear gas) so that you can smell it if there are leaks. The most dangerous times of fumigation is actually when the house is untented (as long as their are no leaks during the tenting process). It is often suggested that when a house is untented – fans be put in the house and the tent is only opened at the roof. This forces the gases up and away from the ground. However, often the house is just untented however is easiest. 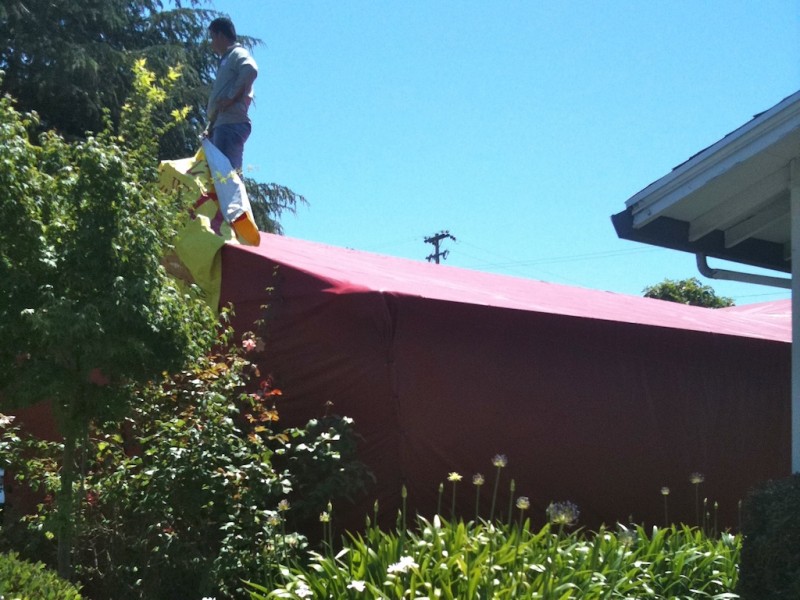 Since we have a 1 yr old and a 4 yr old – it was suggested that we NOT allow them to go outside and we don’t open our windows. Since it’s summer and we are having a heatwave, he suggested that we at least not open the windows on the side of the house closest to the tented home.

I did learn that sulfuryl fluoride dissipates quickly and since it is a true gas, has virtually no residue. It also does not effect soil – so our garden should be safe. Though, I did read that it is suggested to dampen the ground where your foundation and soil meet. This will prevent leakage and create a barrier, so the gas will not have a way to be absorbed into the ground. I am uncertain if this is true, but I did make sure that our garden was watered before the house was untented, just in case.

Last year, sulfuryl flouride was under review to ensure it’s safety. I found several documents that stated that sulfuryl flouride has an atmospheric lifespan of approx. 30-50 yrs. However, the NPIC says that is inaccurate. If you read their fact sheets, they spell out all the testing that they did (in simple terms) and explains why they view it as safe.

The Journal of Pesticide Reform disagrees. They show studies and tests done that prove that sulfuryl flouride is dangerous and should not be used.

When I was on the phone with the NPIC, they conceded that they were aware of the studies that the Journal of Pesticide Reform wrote about. The guy on the phone also stated that if we were concerned and had an alternative place to stay, than we should just do it. Which is exactly what we did. We left our home for 3 days, sealed it shut, and when we came home aired it out.

So, you may wonder why people aren’t just using the heat method to eradicate termites? Well, for most, it’s the cost. I have no idea why, but it can cost up to 4 times more than sulfuryl flouride. Heat fumigation consists of heating your home to a minimum of 120F degrees for at least 4-6 hrs. Different states have different parameters because houses are made differently in different parts of the country. The biggest concern that I read about are 1. removing all heat sensitive items from your home (which can be a lot: electronics, plastics, etc) and 2. ensuring that no heat leakage happens. Often times, where the frame of your home hits the foundation – heat can leak and you must ensure that all the wood in your home heats to 120F degrees, or you will probably still have termites. The good things is that after your home is heated for the 4-6 hrs, it is untented and you can enter the home at anytime.

For our neighbor, I am sure he had no idea the concern we would have regarding his fumigation. But it did cause us concern. In fact, we left our home for 3 days as soon as we saw the tent. The suggestion by the NPIC to not have our children outdoors or open our windows, in the heat of the summer, would have made us miserable. How do you explain to a 4 yr old that he’s not allowed to ride his bike in front of our house (and our neighbors). And a big red tent? That’s just asking for a little boy to see what’s inside.

Fumigation is a common enough event. No need to let your neighbors know…or is there? Right when it happened, I was so upset I wrote a letter to our neighbor, but I never delivered it. Finally, a week later, I decided I had to let him know. I stressed that we didn’t want to dictate what he did in his home, but that to please consider letting us know if toxic chemicals were going to be used again. I included print copies of all the info I linked to above. I tried to be as cordial as possible. Will it change our relationship? Will he actually inform us next time? I don’t know, but at least one more person is aware that toxic chemicals effect more than just the termites.