I have a secret…I don’t like milk. I rarely ever drink it. But I love dairy! I love cheese, I love yogurt, and I love cooking with all sorts of dairy products. I have promised a few people that I’d post on how to make yogurt, buttermilk, and sour cream. They are all super easy to make with very little effort… so easy that you could make buttermilk and sour cream before you even finish reading this!

For those that have no interest in making yogurt, buttermilk or sour cream, let me tell you – once you start making these you start realizing how often you use or eat each. I never used buttermilk until we started making it. Now I make pancakes, muffins, granola, and more – all because I have buttermilk in the house. I also cook with yogurt and sour cream – which I never did before. For ideas and info on how I utilize my dairy creations, check out my past post on breakfast

Also, by making all 3 of these, I am now adding another pro-biotic in our diet. You can buy yogurt that have additional pro-biotics added, but it also has additional sweeteners and flavors. We sweeten our yogurt with fruit and maple syrup. Yum!

I am a raw milk drinker. If you read the Breakfast post I refer to above, you will know that I love organic, grass fed milk. By pasteurizing milk, enzymes that make the milk nutritious are destroyed. A great book that explains a lot about raw milk and pastuerization is History of Raw Milk.

However, you do not need to use raw milk. The only thing you can NOT use is Ultra Pasteurized milk. Due to how it is pasteurized (super high temp, super fast), almost all the enzymes are killed and it will not work. (On a catty note, if you are drinking milk for it’s nutritional value – and you can’t use ultra pasteurized milk to make any cultured products, maybe there’s something wrong with it? Hmmm) 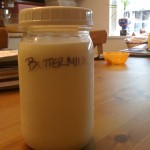 Buttermilk
I make a quart of buttermilk at a time. To make buttermilk, you need cultured buttermilk. You can buy any brand, lowfat or skim (I have NEVER found whole milk buttermilk – which is what we make, since I feed my kids whole milk only).

So, to make buttermilk – you take 1 part buttermilk and 3 parts milk, stir/shake it up, and let it sit at room temp for 24-48 hrs or until thick.

I use a quart mason jar with cup marks on the side. I fill it with 1 cup of buttermilk (homemade from the last batch or from a store carton) and then fill the rest of the mason jar with milk. I put the lid on and shake it. Then I sit it on the counter for at least 1 day and when I notice it’s thickened – I put it in the fridge. According to Wild Fermentation, homemade buttermilk can last months! 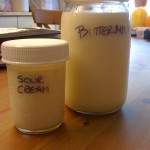 Sour Cream
Sour Cream is made the exact same way as buttermilk EXCEPT using cream instead of milk! Technically, I believe what you end up with is in between a true sour cream (which uses special cultures) and a creme fraiche…but to someone like me it’s pretty close and it tastes pretty darn good.

Now, I don’t use sour cream as much as I use buttermilk, so I make it in pint jars. I put a 1/2 cup of buttermilk in the jar, fill the rest up with cream, tighten the lid, and shake. Then I leave on the counter at room temp until thickened – approx. 1-2 days.

Recently we made a ranch style dressing and I had no problem with our kids dipping veggies and even home made fries in it because – hey, they were getting an additional pro biotic. 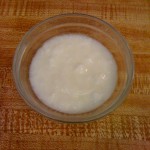 Yogurt
So let me start by saying, I heat my milk to between 140-165F degrees. I know I use raw milk, and I know I talk about not pasteurizing milk, but I have also found that milk not heated to at least 140-160 degrees makes yogurt that’s too runny for my family.

I keep below 160F degrees because, technically, I’m not heating the milk high enough to actually “pasteurize” the milk (though, I am still killing enzymes). I know a lot of people who buy organic pasteurized milk to make yogurt because it’s cheaper than buying raw milk and they heat the milk anyway. For me, I figure I’m not heating the milk for that long and that high, so I may lose enzymes, but not as many as if I were using already pasteurized milk and then heating it again. 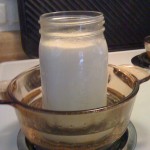 So now that I have completely confused you with technicalities – here’s what I do. I take a quart jar and a pot of water. You don’t need a lot of water, you are simply using a double broiler technique. I fill the jar full of milk (4 cups), put the jar in the pot of water, and turn the stove to medium. 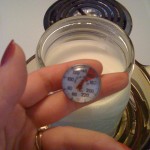 I heat the milk, and when it’s somewhere between 145-160F degrees, I take the pot off the water, and let it cool down to 110F degrees. Once the milk reaches 110F, I pour out a bit into a cup and add yogurt starter or 2 tablespoons of plain whole milk yogurt. I stir this quickly, not trying to mix it all in completely, and then pour this back into the jar. Stir again, quickly and not trying to completely incorporate everything. The cultures will do all the work. Then you just want the milk to incubate (stay at approx 110F degrees) for about 6-8 hrs. After that, you refrigerate for about 8hrs until its set. 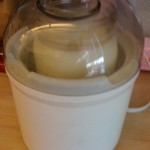 I have a Salton yogurt maker where I incubate the yogurt. I usually make yogurt at night, sometimes while also putting the kids to bed. Making yogurt is great because it doesn’t have to be exact, which is why I give such a temperature range. It also takes sometime for the milk to cool down back to 110F degrees, so I have time to help the kids get ready for bed, etc. The other great thing, is there is no stirring or needing to watch the milk. When the milk starts to cool off, a skin will form on the top of the milk and you can scrape that off, but that’s about all you need to do. After you add the cultures or existing yogurt to the milk, you just put it into the yogurt maker. The hardest part is for me to remember to take the yogurt out of the yogurt maker and put it into the fridge.

Now you don’t need to have a yogurt maker. I have heard of people putting the warmed milk, wrapped in a towel, in the oven with the pilot light on, using a crock pot full of water, a heating pad, and using a cooler filled with hot water. Basically, as long as you can keep the milk at about 110F degrees, it all works. I bought a yogurt maker because it was easier for me.

If you want to use raw milk and you want to keep it “raw”, you don’t heat the milk more than 110F degrees. When it hits this temperature, you simply add the cultures or yogurt and follow the info above. However, and this is a HUGE however for me, the yogurt is on the runnier side. It’s between a store bought yogurt and a smoothie. My kids don’t like it, so I don’t bother.

Yogurt Cultures
You can use any plain store bought yogurt, as long as it has active cultures. Once you start making yogurt, you can keep a little on the side and continue using that; however, after awhile you will notice your yogurt is a little more runny and you will want to get some store bought yogurt.

There are also cultures you can buy. Yogourmet yogurt cultures are sold at many supermarkets, including the Kroger’s and Earthfare I used to go to in Knoxville, TN and Whole Foods (almost every WF I’ve been in sells it). There are a variety of cultures out there. I have found that my favorite cultures are from Dairy Connection. I find that the ABY-2C cultures are very thick and creamy, which is more like store bought yogurt. Though, recently I have been considering trying a few other cultures I’ve read about.

Runny Yogurt
If your yogurt doesn’t turn out, don’t throw it out! Inevitably, you will have a runny batch. It just happens. I tend to turn it into yogurt cheese or use it in cooking. There are tons of ways to use yogurt that you might not find edible as “yogurt”. Also, yogurt gets runnier the more you handle it. So, if you stir yogurt a lot, or you scoop small spoonfuls out of the jar each time – the yogurt will get runnier.

Yogurt Cheese
I love yogurt cheese. I use it as a substitute for cream cheese and for goat cheese. It’s got a creamy consistency, but it’s also tart. To make yogurt cheese, take a few layers of cheese cloth and pour the yogurt into it. Allow the yogurt to drain. You can save the whey and use it for soaking grains/beans, as a plant food, or even to drink. I gather the ends of the cheese cloth, rubber band it shut and hang it over the sink to allow all of the liquid to drain off for a couple of hours. This will make the yogurt cheese for a ball and I store it in the fridge. I think it’s great on bagels and crackers. You can add spices, but I like it plain.