Dinner is the one meal we all sit at the table and eat together. When Marc and I found out how few people actually take the time to do this, we promised ourselves that we would try to eat together for as long as possible. We all have extremely busy schedules and with work – this can be a challenge, but we have found some great tricks along the way that I thought I’d share.

Let me first start by saying – we do NOT make more than 1 meal…meaning, I do not cook something different for the kids. Sometimes, we’ll dish their portions out and then add a little more spice to ours – but that’s almost it. The second things for us – you must try it, at least a few bites or don’t eat anything. If you truly hate it (adult or child) than you can have an alternative, but you CAN NOT say you won’t eat the dinner someone made without trying it. Period. Some people may gasp – let your child starve? But the reality (for us anyway) has been that our children will at least try every dish that they are offered. Again, they may not love it – but almost every meal is eaten. Since we have always had these “rules”, we haven’t had many issues with food and our kids are quite adventurous with food.

The biggest thing about cooking is to not be afraid to make it up as you go along. I would not say I am chef caliber, but I get by in the kitchen. At least 1 meal a week, we wing it. Throw stuff that we have lying around together and see what kind of concoction we can come up with. It definitely helps to have a well stocked pantry to do this and to have a few standbys in the wings, just in case. There is also nothing wrong with simple favorites, either. We have at least 1 or 2 of the same things each week. Why not? We all enjoy them and they are easy for us to make.

A Well Stocked Pantry
What’s a well stocked pantry? This is highly subjective, what I like may not be the same as others, but there are a few things that I think everyone would benefit from keeping on hand. I view a pantry as all items that we make sure we have on hand that can be thrown together with specific fresh ingredients to make a meal. For us, it’s rice, pasta, beans, grains (primarily wheat), eggs, milk, chicken broth, cheese, olive oil, and spices. If I’ve got these in the house – I can make several meals with no worries.

Having Favorites
It’s okay to have favorites. Hey, they’re your family’s classics. They tend to be easy to make, no fuss, and you know everyone will eat it. So why not? 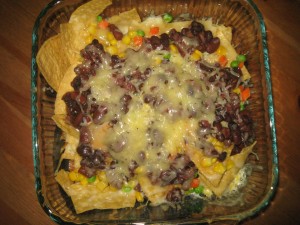 Our family loves nachos. We probably make nachos at least 2-3 times a month. I take a square casserole dish, put organic tortilla chips on the bottom, add shredded cheese, beans, any meats that we might have (if we have any), veggies (usually almost anything that’s left over in the fridge that I want to use up – cut up fine or shredded or if I don’t have time, I use a frozen veggie mix), another layer of chips, cheese, and beans. I cook in the oven until the cheese is melted. Then we add some chopped tomatoes (or salsa, if Marc’s made any, since he makes the best salsa). It’s got beans for protein and veggies for vitamins. Sometimes, I’ll make corn tortillas (super easy, since corn tortillas are literally corn flour, water, and salt) and we’ll have tacos – using almost the same ingredients as nachos.

We also have favorite pasta dishes (Marc makes an awesome spaghetti sauce, where he adds shredded carrots and celery to it – and no one ever knows!) and rice dishes. All of our favorites are usually made on the nights when we ask each other, “what’s for dinner?” Usually, James will chime in with one of the favorites and we just go with it.

There’s also nothing wrong with a great antipasto platter. Some days, we just don’t feel like making a meal and would rather all pick at a bunch of different things. Cheese, sausage/salami (or other meat), crackers, olives, pickles, and some veggies: tomatoes, carrots, celery, etc are all you need nutritionally. We all gather around a big plate and dig in.

Recently, I’ve been making a great Bolognese Sauce from Can You Freeze It? I have enough to make a great spaghetti with meat sauce for dinner, make a lasagna to freeze, and still have 2 more portions to freeze. 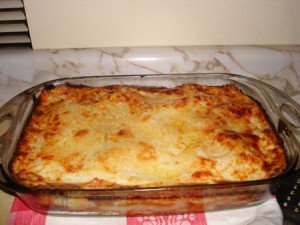 For the lasagna – take a small container of ricotta cheese, mix in an egg, 1-2 cloves of finely mince/diced garlic, 1/2 a finely diced onion. To 2 cups of tomato sauce (or Bolognese sauce) add 1 cup of broth or water. Add grated cheese and additional veggies (optional)

In a casserole dish, put a little sauce (it can be regular tomato sauce, if you don’t have the Bolgnese) on the bottom, then add a layer of lasagna noodles (uncooked), a layer of sauce (I like to put a thin layer over all the noodles, making sure they are completely covered – since they aren’t cooked), then a layer of ricotta, then a thin layer of grated cheese – keep layering for at least 3 layers. You can add veggies as a layer too. End with a layer of noodles covered in sauce. Over this, add a nice layer of grated cheese. I immediately freeze this until ready to use, thaw in fridge then cook at 350-375 for 45 min or until hot and cheese is bubbly.

Whenever we can, we will make twice as much as we can eat and freeze the 2nd portion for later. Since, we are still a young family, with only 2 eating adult portions, we don’t need to use anything larger than an 8×8 casserole dish. So recipes that say to use a 13×9 dish – I just separate into 2 casserole dishes and freeze the 2nd one. For those wanting even smaller portions, you can use a loaf pan and have servings perfect for 2.

We’re kind of bad about eating leftovers within the next day or 2, so by freezing the leftovers, we can have meals that seem new the following week – or even the following month.

Meats
We are not huge meat eaters. I was a vegetarian for almost 18 years. When I decided to eat meats again, we agreed we’d primarily eat only pastured beef and poultry. For us, meats and poultry make up no more than 1/3 of a meal. This was considered standard, but in recent years Americans have made meats/poultry the main item and vegetables secondary, if non existent in their meals. 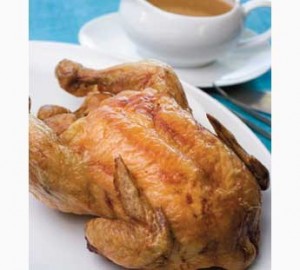 When I make chicken, I tend to roast a whole bird. It’s way more cost effective and super easy. Sometimes, we even cook 2 birds at the same time (same temp/same time as cooking 1). I use a simple salt/butter rub and that’s it. A whole chicken can be turned into at least 2-3 meals. I usually roast a chicken on a weekend night. I sometimes make mashed potatoes and I ALWAYS make gravy. Right after we eat, I shred the chicken for leftovers. I load the crock pot with the carcass, giblets, veggies, dash of apple cider vinegar, and water and start making a bone broth. The Benefits of Bone Broth are so much better than any plain chicken stock you could every have (and please do not even suggest using a canned/boxed/cubed stock!

With the shredded chicken I will do one of two things. I will take a casserole dish and make a freezer dish. I usually start with a layer of rice, a layer of shredded chicken, a layer of veggies (this is also a great use for mixed frozen veggies), a layer of gravy, and a layer of cheese. When we’re ready to eat it, I just thaw it in the fridge and then throw it in the oven until warmed through (usually at 375 for 45 mins).

I will also throw the shredded chicken into pasta or in a Mexican dish: nachos, tacos, etc.

We do basically the same thing with beef. I tend to make roasts and the left overs get turned into casseroles similar to the chicken one, shredded into Mexican dishes, or turned into sandwiches for lunch. Marc will also make us a yummy Thai beef salad, too. Marc isn’t a huge fan of pork (except Bacon), so we don’t cook pork that much, if at all.

I also found that ground beef is very quick and user friendly. I’ll make a batch of meatballs and freeze the extras for later. When I make meatballs, I wing it. I use the food processor and turn a slice of bread into crumbs, and then throw a carrot, a stalk of celery, and little parsley into it and shred them very fine. I take the bread crumbs, shredded veggies, 1lb ground beef, and an egg and mix them together. Then I wet my hands and roll out meatballs. I bake them (sometimes I sear them on the stove first) and then save 1/2 for later.

We tend to make burgers a few times a month, too. We also cook up at least 1lb of ground beef with some chili seasonings and use it in a variety of meals. It’s great to add to spaghetti sauce, it’s great in tacos, on nachos, and in sloppy joes.

Since we add meat and poultry to dishes, we tend to not eat as much as if it were the main meal with everything as side dishes. This not only saves on time, but also on cost.

Fish is the only dish we eat where we don’t tend to have leftovers, but it’s also the one I cook the least. I am concerned about mercury levels and, lets face it, fish can be intimidating. Marc makes an awesome ceviche, which is a treat for when it’s just us (I’m not comfortable letting the kids eat ceviche yet, as they are still so young). I finally just started making a simple baked fish dish where I would get a white fish (primarily tilapia)- and season with lemon, salt, and lemon pepper. We also love shrimp. We often get frozen shrimp and throw it in rice dishes and pasta dishes.

While writing this, I realized – I really don’t use recipes much. Or I read a recipe, get the gist of it and then wing it. It’s just hard to come home at 6pm and get a recipe and start making something. So we just go by taste or with pre made meals. I also have a great husband that does the cooking at least a few days a week. By sharing the duties, we’ve been able to ensure that we can all sit down together and enjoy.