Kale is one of those amazing vegetables that is chock full of great vitamins and nutrients…but until last year, we didn’t really eat it much. I never grew up eating kale and I had no idea how to make any yummy kale dishes. I tried a kale salad, adding it to soups, but nothing really worked for us… until my husband made kale chips (and I finally did too). Wow! Nowadays, we can barely keep them from being devoured within hours of coming out of the oven.

So why was I so eager for my family to eat kale?

It all started out with dental bills my husband accrued from 3 visits to the dentist. My husband and I don’t have the best teeth and after these bills, I realized that we had to do something to make our teeth better and to prevent our kids teeth from having issues in the future. I started reading up on tooth remineralization and how we can make our teeth stronger. After much online research, I discovered that vitamin K (k2 in particular) was lacking in our diet.

Vitamin K2 is one of those vitamins that I really hadn’t heard about, but research is showing is vital for strong bones and even for cancer prevention. Kale is chock full of vitamin K and a ton of other nutrients. Now all we needed to do was find an easy way for us to enjoy eating kale. That’s when we discovered kale chips! 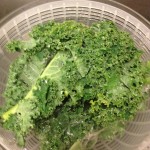 The first thing I do is cut the stem off – right where it reaches the leaf – and soak the leaves for at least 30 minutes. This reduces them from getting too brittle or burning in the oven. Plus, it helps refresh the kale so it’s crisp again (think salad greens). After you soak, you will want to dry the kale. I soak and then spin the kale in our salad spinner to get as much water off the kale as possible. 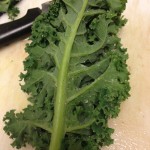 Next, you’ll want to cut the spine out of the kale. I take the kale, fold it in half and cut the spine right out. You could also just cut along both sides of the spine, whichever works easier for you. After you cut the spine out, cut or gently rip the kale into smaller pieces, BUT not too small, it shrinks as it dries! I usually cut each piece (I usually have 2 pieces – 1 from each side of the spine) in half… maybe into 3 pieces,  if it’s a huge leaf. 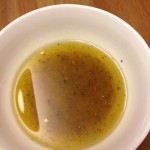 I then make a vinaigrette for my kale. There are tons of recipes for kale chips on the internet, but our family likes a very simple vinaigrette made from olive oil, a dash of toasted sesame oil, salt, and a mixed seasoning called Herby – but we’ve used just salt, pepper, and a little garlic powder and it’s been just as yummy. You can use any blend of seasonings that you like. 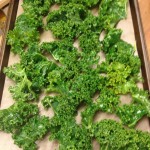 I cook my kale in the oven at 185 degrees. I check them after about 20-30 mins. I usually have 2 racks going, so mid way I swap them so that all the kale chips are evenly cooked and the kale is crunchy and crispy. Depending on your oven, it can take 30 mins to 1 hr for crunchy kale chips. 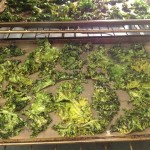 There are some that say that oven baking kale chips is a no no, as enzymes in food start to die if they’re heated above 118 degrees Fahrenheit. But kale chips just aren’t as crisp out of a dehydrator as they are out of the oven. I have tried this, I have tasted friends’ dehydrated kale chips, and they just aren’t as good as the ones out of the oven. This is my own preference. Yes, some enzymes are lost – but we’re still getting such a powerhouse from our veggie that I don’t mind. Plus, my kids can eat all the kale chips in one sitting if they’re oven dried, but only ate a couple when they were from the dehydrator! 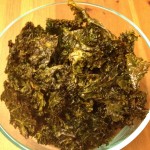 And here are the kale chips done! This picture shows about a half of a “bunch” we got from the farmers market. We got the kale for about $2. I’ve seen bags of kale chips at stores that cost over $5! It’s way too easy to make kale chips and doesn’t require a lot of hands on time. Just be sure to make enough because it goes fast.

I really hope you’ll try this easy recipe and end up being a kale chip fan too!